I’d like to ask a simple question. Can music games improve your ability to play a real instrument?

After drumming in Rock Band for almost a year I’ve decided to learn the drums properly again. While there is no definitive answer for you just yet, this is a subject I’d like to return to as as my real drumming improves.

But before we get to the lessons themselves; a little information on my musical history.

Now I have to be honest I have played the drums before, but I would describe myself as extremely amateur. Largely self taught. My practical drum experience was from about 11 years ago, and I’ve largely forgotten. I’ve picked up a lot of bad habits from RB2, so I’d like to start over.

I played the violin when I was very young, and I also played in a percussion section (Xylophone, Glockenspiel mainly) so I used to have a fair understanding of musical theory. However I am sad to say this knowledge has completely drained from my head.

On July 15th 2008 I unboxed my Rock band instrument set for the first time. But who was I kidding, I bought Rock Band and it’s sequel so I could play the drums first, and second for the music and for the sheer joy of experiencing one of the best multiplayer games ever made.

After muddling through Easy and Medium difficulties, by November 2008 for the release of Rock Band 2 I was playing on Hard exclusively. And now less then a year after I bought the original game I play on Expert difficulty for the vast majority of songs.

Week One – Re-learning the basics

It’s been years since I’ve sat in front of a drum kit this big, and I’m suddenly extremely nervous. First things first apparently the way I am holding the sticks is good, thankfully I have learnt some of the benefits of stick bounce from RB2, I’ve noticed I tire less when I let the recoil of the stick do most of the work.

We go over the basic drum names, and I hit problem one straight away – the high-hat sat on the far left of me, which forms the basis of the main beat in my starting drum grooves, we play it closed today but even so, I now have a second pedal to worry about when I am now more used to one. So not a problem for now, but perhaps a problem for later.

I have a total of nine drums to manage rather than five Rock Band ones, that’s the biggest hurdle.

Problem two is that I have to return to playing cross-handed, that is right hand over left so I can play high-hat and snare. To deviate a little:

When playing RB2, your main drum beats are on the red and yellow drums. Snare is usually the red drum on the left in-game, and yellow the high-hat.

Except on a normal drum kit setup, it’s the opposite; your high-hat is on the left, and you play cross-handed (as a right handed person) to prepare your stronger hand for faster beats. I’m no expert on the subject, but I am guessing Harmonix changed this around to make the hardware more accessible to non-musicians.

We start building up a basic groove, my tutor seems pleased that I play all drums on all hands and feet very evenly, apparently this normally takes a while to get right in your head. (Thanks RB!)

I drum along to my first song (Californication, Red Hot Chilli Peppers) I am trying to relax but I’ve noticed how much I stare ahead at one fixed point like I am looking at a screen for guidance. Must try harder not to do this next week.

As I suspected the hardest thing to unlearn is the fact that I am no longer taking direction from a screen. I need to learn to relax and loosen up a bit. I manage to play the grooves from last week without too many problems, but taking on new stuff is hard. I am used to playing by ear and suddenly I have to remember to count and think again. So the majority of this lesson is just spent practicing what I can do over and over and over. This hits hard, although still fun – it’s a step back from the immediacy and accessibility of the game and a reminder that in the real world things need to be slowly perfected over time.

My hands do in fact need some tweaking to help prepare for faster beats, I need to move away from my RB method of parallels sticks so that they form more of triangle shape on the snare. This helps, but my left hand is weaker and frequently messes up it’s beats on my fills. I would like to improve this.

Co-incidentially I am practicing (outside of my lessons) on the Rock Band kit atm, less than ideal. Not enough drums for one, but at least I have some real sticks and something to hit! For this reason alone the drum training mode of RB2 is a genuine blessing, until I am ready to commit to something a little more permanent at least. 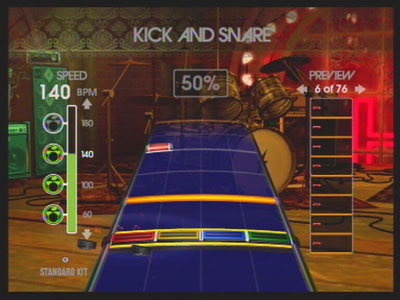 One thing RB does not prepare you for is the space between the different drums, at least not sufficiently, extra time has to be factored in between the beats. Biggest problem for me is moving to the cymbals in proper time. I also forgot how incredibly noisy the crash cymbals could be. Teacher recommends some ear plugs, I might just.

Perhaps RB has not been as much of a help as I originally thought. I mean it’s helping me to juggle all the various new grooves that much more quickly, but I am still finding it hard to relax and bash the hell out of the real drums, but anyone that’s seen me drum on RB will know this will not last long.

Overall feeling? The real work has started now and I need more practice, so off I go. Stay tuned.

4 replies on “Drumming with Rock Band”

I find the drums intimidating because they are so loud and everyone can hear when you mess up 😛 That said, playing a bunch of Rock Band 1 & 2 did re-spark my interest in learning the guitar. I played piano when I was a kid and always wanted to learn. Now it’s been about a year since I picked up the guitar, but my goal is to start again this week. Jesse (Main Finger) had the same cross arm problem on the RB drums, as he is currently learning the real drums.

Ya, I totally agree that the drums are intimidating. I really want to get an electric kit at some point because I’m really self conscious so I usually wait until everybody else leaves the house before I do most of my practicing on my acoustic kit. I played the rock band 1 drums briefly and hated them because I couldn’t quickly tell which colored circle was suppose to be which drum part. When playing the real drums, you never have to think about which drum part you’re hitting because they are very easily identifiable. A crash looks like a crash, a snare looks like a snare. RB1’s identically sized circles just felt very alien. When I breifly played the the guitar hero world tour drums with the raised cymbals at PAX, it felt much more natural, because there was at least SOMETHING on the kit that wasnt the exact same size and positioned at the exact same height.

Playing drums in RB is like having someone stood just behind you ready to chide your for missing a beat. Real drumming is expression, yes there is discipline involved but without the computer demanding perfection every time you can relax and just feel it. Glad all this is going well.

Heh, I was saying the other day how drumming must be harder when you’re not reading from a screen. Still, I’m really happy that you’re giving it a go, at least – it shows that you’re willing to do more with your skills than mess about with the game, and it (sort of) proves that gaming isn’t always a completely worthless pastime; even if it’s quite alien compared to the Real Thing , it at least inspires people to give it a go…