Time for an update on on the progress I’ve made with learning to drum from Rock Band.

As fate would have it in the time since my first post on this subject I have been without the internet for nearly two months – so despite being unable to write about my progress I’ve certainly been able to give it more time and focus. So now it’s time to get serious.

Last time I talked about bad habits I had picked up from Rock Band, a big part of the downside about learning how to play from the game is that is drops you in at the deep end by allowing you to play the song in full. This is great to get a feel for the songs and to feel motivated and pleased quickly, but you end up learning to play each song using the shortest route to win, the path of least resistance if you will – your own way of bashing through which usually takes up the most energy. 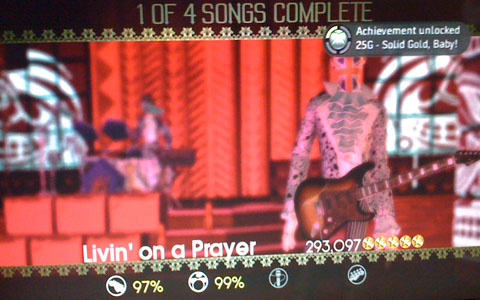 In reality every song is made up of key grooves, with independent parts for each hand and foot that you build up in layers, as I learn to play the drums I am in fact mastering each hand and foot movement, and while Rock band has helped me to perfect a steady sense of rhythm it can at times hide the individual components that build up a song or leave entire parts out altogether on some difficulties.

Jesse touched on this in his comment on the last post. It’s actually very hard as a drummer to figure out which drum pads are playing which parts in Rock Band, or to deconstruct the song in the way you would if you were actually learning it. This wouldn’t be so bad if every pad stuck to a certain part, but each colours purpose changes based on context.

However another problem with the game is that I’ve always known my hand movements in Rock Band were a mess, as I was failing sequences of songs completely by just making up how to play it. This is where learning rudiments come in, as you learning to play the basic parts of songs accurately using efficient hand patterns. 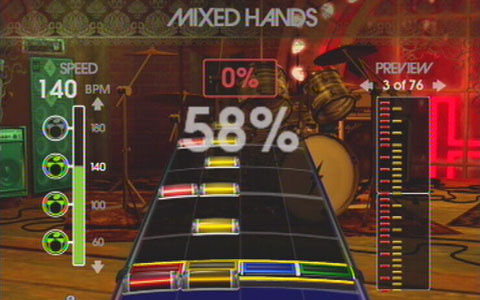 For example on sections with tons of red notes (snare drum usually) I was doing the following.

Or alternating my right and left hands and doing loads of single hand movements back and forth between my two hands, sometimes just because of the way I had originally learnt the song in Rock Band I was even hitting all notes with one hand for entire sections – now that is tiring especially when the songs speed up significantly.

I could have been using paradiddles to improve my accuracy in these sections.

With practice the speed and accuracy of my paradiddles (among other rudiments) has rocketed already, but I still have tons more rudiments to learn and I’ve spent most of the intervening lessons since my internet absence to slowly make my way through a big list of the main ones. This isn’t considered in Rock Band in any major detail. You get given the part and how you interpret to play with your hands is completely down to you, while I appreciate the freedom behind this idea, it’s helped me to develop some really bad habits.

I say second drum kit because buying my Rock Band instrument set was extremely exciting, but I have to say nothing beats the experience of bringing a real drum kit into your home.

It seemed apt to go for an electric drum kit because of how I had gotten into drumming, and I eventually decided on an electric kit for two very simple reasons – I am short on space and I can’t make a lot of noise while practicing.

The kit itself is a Roland TD-4K, and I think the best feature is the fact that I now have a practice setup which properly matches that of my lesson kit – the bounce of the mesh snare drum feels like an actual drum skin, and I have actual, playable cymbals and a proper closable high hat (and a second pedal for it no less).

Upon building the kit I realised another factor about drumming that Rock Band has taken away – personalising your kit. Half the battle with drumming is setting up your equipment around your personal space, with everything at a comfortable height and reach, movements between each of the drums need to be factored into the speed of your play, and the close proximity of the RB pads takes a lot (but not all) of these considerations away.

The bass drum is a huge improvement over the RB offering. My original RB pedal is cracked after months of play in expert and hard, mostly due to the way that I play it – heel up rather than heel down. The bass pedal has always been a major complaint of mine regarding the original game, because you have no beater actually striking a drum. This has led to another problem my heel up technique is good, but I’m now so used to holding the pedal down when it’s not in use I automatically muffle the bass after each note.

But at least I can now I can start to get some proper accents into to my drum beats rather than making up when I think the drums should be struck harder, it’s actually miles more difficult to count the beat and be told when exactly to do this. But at least real drums have an actual bounce and sensitivity to them. I’m used to the RB pads now, but when I started it was rather like beating a piece of wood.

Regardless, accenting will mean learning to count the beat of the song properly so I can place extra emphasis (or less emphasis) on key notes, this is still as much about feel as it is precision, to explain further:

All this means is that I am hitting the first note of each bar more strongly than the others, you can see how simple things can quickly get very complicated when it comes to notation. But despite some of the RB learning disadvantages that’s come out of this post I want to end this post on a very large and extremely positive point:

It takes genuine understanding of your craft to be able to simplify it so you can explain to others, and if anything the last few weeks of drumming have made me understand and appreciate Rock Band more. Harmonix have laboured over every finite detail of four sets of theory and practice to make an extremely accessible game and a valuable learning tool, while it’s hindered my experience this time around, in the long run it’s benefited it a great deal more.

Jumping in at the deep end

So I’m nearly ready to start learning some actual songs, I’ve drummed along to some basic pieces but I’d like to try something a little more challenging, so I can test my sight reading, (and my recording ability) Since I started in Rock Band I’d say it’s only fair that I get started on some songs from the games, so feel free to comment with any requests from the original game or it’s sequel.

Be gentle with me guys!

3 replies on “Drumming with Rock Band #2”

I couldn’t agree more about the position of things. The pedal feels the most akward of all as you can’t adjust the angle or distance in any way. The akward position my foot has to be in to play RockBand makes my foot get tired exponentially faster than on my acoustic kit.

That guitarist in the second pic looks familiar. 😀 One of the things I find about real instruments vs Rock Band is that with the latter, you can abuse Star Power and mash your way through tricky solos, whereas such techniques aren’t available on real instruments. Since I taught myself a bunch of stuff on the acoustic before GH was even conceived, I don’t really rely on it as a training tool, but it is handy for giving you a rough idea of a songs technicalities… I must also confess that I sometimes use the backing tracks of Practice Mode to play along to on my acoustic. 😛