It turns out that any violent video games sold to underage kids in the UK has not been technically illegal due a loophole in the 1984 Video Recordings Act.

So for just over twenty-five years a lot of the negativity that gaming has courted in this country since the “video nasty” era of the 1980s has been upstaged by an even bigger blunder over legislation.

Won’t someone think of the children?!?

The revelation that the UK’s 1984 Video Recordings Act is fundamentally flawed raises considerable concerns for the future of video game classification.

Technically speaking right now any child could walk into a games shop and buy any 18 rated game or DVD they desire – with no current formal repercussions for the retailer. I don’t expect a flurry of underage gamers mostly because most decent game shops wouldn’t allow it, but I do hope this will help to ignite debate about the way games are sold in this country again.

Put it this way every single game that the BBFC has ever reviewed for a mature release into this country is affected – that’s a massive back-catalogue.

It puts the furore made over every single violent game released in doubt – and makes any changes made to any violent game on “accessibility to children” grounds ever so slightly absurd, comedic infact. I cannot help but laugh.

Imagine if this had happened in the States, specifically at the time when Hot Coffee in Grand Theft Auto: San Andreas reared its ugly head. How differently could things have been if a legal blunder as big as this meant that the mature rating giving to that game in retrospect was not only technically redundant then, but had been for the last twenty-five years. 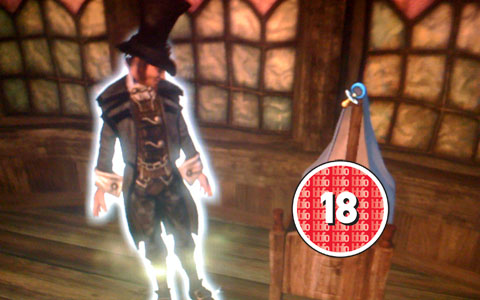 A little context to the 1984 Recordings Act

Retailers, consumers and parents have been saying for years that our current games rating system is inherently flawed, difficult to enforce and hard to understand.

We currently operate on a two tier system – violent videogames intended for the over 18s are rated by the British Board of Film Classification (BBFC), which also handles other legally enforceable ratings such as 12 and 15.

Everything else is classified using the Pan European Game Information (PEGI) system which works on a code of conduct model and serves as an advisory scheme to help parents make decisions on what games are suitable for their child using iconography.

Ironically it is the planned movement from the BBFC system to a new legally enforceable PEGI system that uncovered this serious loophole, and it will continue to exist for the next three months until emergency legislation can be passed to plug it up.

How did this happen? Basically when compiling the Act the Conservative government of 1983 failed to inform the correct European Authority of the intention to make it law, so parts of the Act never became law, subsequently it wasn’t checked by numerous Labour governments.

This raises some huge questions

By my reckoning the BBFC have been responsible for classifying games since 1985 – why was this not noticed just one year after the newly passed act came into power? And even worse not noticed again by the government in 1993 and 1994 when the law was reviewed?

It has taken until 2009 – when a potential new ratings system is being pencilled in to protect children from violent media that they could undoubtedly access anyway. How does replacing one unenforceable system with another make our games system any more tenable?

I’m convinced no one really cares, and that’s a crying shame – because before this loophole even existed the games rating system was already broken, and it’s a problem you’ll find absolutely everywhere regardless. It’s because games are deemed something suitable for children and not a emerging and varied medium – like film – capable of displaying the very best and very very worst of what we are.

Parents buy unsuitable games for their children regardless of the ratings, they cannot be told at point of sale and they certainly won’t pay attention to governments especially with bureaucracy like this fresh in their minds.

It’s a hilarious day to be a gamer, sing the blunder from the rooftops – when the next Rockstar game comes around the UK government won’t have a leg to stand on.

5 replies on “Violent video games for all ages”

Basically governments weren’t really thtat bothered as long as some quango like the BBFC was seen to be taking care of that end of the games market. Now they’ve been caught out it shows up just how much governments down the years have really cared about games. See also tax breaks for UK devs.

Every time something about violent games comes up in the states, some idiot filibusters about how they need some sort of rating system for games. Apparently, these people don’t do any research, or even bother pick up any game released since 1994 to find that the ESRB exists, and game companies were responsible enough to already self regulate this sort of thing.

The interesting thing is, the next Rockstar product might release in this 3-month period while they try to get the emergency legislation. The Ballad of Gay Tony is obviously the next downloadable episode for GTA IV and if I’m not mistaken, is due in October along with the retail disc containing it and The Lost And Damned. It’d be fairly easy to assume that this new episode will have some controversial content, much like the previous episode and yeah, if it does then it will be interesting to see how things pan out given this loophole. Interesting times ahead then. On a semi-related note, how much do you guys over there know about the Australian ratings system and our lack of an R18+ rating? No doubt you’re aware of our bans on various games, but is that as far as it goes?

Thanks for the comments lads.

@vim – No they weren’t bothered you’re right, the UK government doesn’t really start to care about video games until the next big moral panic about them starts up – I mean just look at how quickly this blunder was covered up by Mandelson’s big piracy decision, it’s laughable.

@Jonah – It’s exactly the same over here – parents apparently don’t understand our system, or choose to ignore it. Even if it’s clarified at point of sale that the game may not be appropriate for their child (even if it’s against the law) most some parents get extremely tetchy if you refuse to serve them – parents of course know best rather than an informed gamer naturally.

@Steve – I don’t doubt that some big developers could be mightily tempted to rush something indecent out in this three month period, but that would be a red flag to a bull in a word exactly the sort of provocation that games and games rating opponents are waiting for, we shouldn’t pander to it. Co-incidentally this is by no means the first loophole in the law – you can provide any game you want as long as it is sold digitally I believe and it’s perfectly legal, so this wouldn’t effect any GTA dlc that I am aware of, however it’s an extremely interesting point.

I don’t know much about the Australian ratings system, but you know what, I think it might be time to learn, fancy cluing me up on it sometime? I think some future cross-country thoughts on games ratings could be very very interesting.

If we’re talking about GTA’s incoming episode specifically, then I doubt Rockstar would be rushing to take advantage of the loophole because chances are, the content was already there, but like yourself I wouldn’t be surprised if other developers tried to take advantage of it. Though then again, 3 months isn’t exactly big enough to see this news and get something out, save for maybe small Indie titles that are probably rated differently anyway, or, if not that, then delivered differently. Which brings me to the digital laws; As far as I know digital content on services such as Xbox Live are rated — at least, they are here in Australia — so something like GTA’s episode would still have to be rated, regardless of content. The interesting thing would be if controversial content has an easier time of getting through due to this loophole, or whether it still becomes an issue much like the nude scene of The Lost And Damned. As I said, interesting times ahead. And yeah, I can try to bring you up to speed on our situation sometime, you can do the same for me and the way your ratings (and games) are handled.