I genuinely believe that gaming like many other aspects in life is affected by mood. Even as the most ardent gamer there are moments where I simply don’t feel like playing anything. I decided to make the most of this lack of motivation and play something truly out of my comfort zone.

The choice may surprise you; it’s an atmospheric classic that I’ve somehow avoided for years, but remarkably Super Metroid isn’t a obvious fit for me.

Getting over the old mantras

I now realise that Super Metroid a masterpiece of design, atmosphere and gameplay, but I have not always thought this. It will seem obvious to anyone that has played the game or grown up in it’s shadow, but for someone playing the series for the first time retrospectively it’s become a bit of a metaphor for all the games that I’ve chosen to ignore for whatever reason over the years. There are so many remarkable games out there that I will never have the time to finish, so I’ve developed an unintentional coping mechanism to rationalise my regret – “I wouldn’t like them anyway”.

I’ve always placed a number of games series in this category, for as far back as my memories go. I can’t even remember where the motivation for these decisions came from, they’re as clear in my mind as night and day. Old presumptions developed in childhood about a series or genre that I can’t quite shake even as an informed adult. Decisions I didn’t question until others expressed alarm at me never having played certain widely-acknowledged classics. 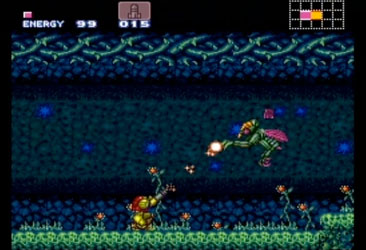 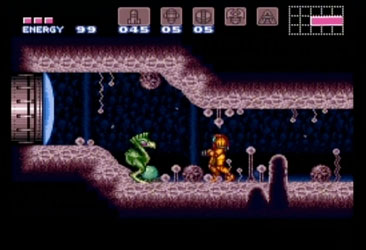 Why does this happen?

Personally at least, most of the games this concerns are the remains of the legacy of growing up during the 1990s during the peak of the Sega/Nintendo marketing rivalry. This faction-based model for playing games is a old approach that I am still working back from. I am slowly revisiting the back catalogue of games that I denied myself as a child; and the Metroid series is one of them. As hard pressed as the Nintendo or Sega mantra seems now, there was some logic to it – it saved my parents the financial worry of buying two sets of consoles and two sets of games, and it saved me from realising there were twice as many games in the world to obsess over. I would have been overwhelmed.

It seems quite bleak looking back on my gaming history, but I was happy then in my little world of Sega, and I am even happier now that I am able to fully experience everything I missed many years later: free from assumption and prejudice. I am as bewildered and excited playing these games now as the eight-year-old I would have been back in 1994 when Super Metroid was released.

It is the weirdest feeling playing a game that I have obviously misjudged for years, particularly as I stumble to grasp the concepts and ideas Metroid develops that are completely new to me. It’s a testament to the timeless beauty and rigorousness of Super Metroid’s design. As such I am playing a game that I have subliminally known for years, I recognise almost every noise and score; and yet it feels new and oddly nostalgic – all at once – like an old, yet happy memory I had long forgotten about.

I am beginning to fall in love with an old “enemy”. Thank you to everyone who recommended it to me.

So glad you’ve taken the plunge into Super Metroid. That game is so special. I hope you enjoy it at least a fraction as much as I do 🙂

Funny really, I’ve just had a period where I didn’t play anything for weeks but wound up playing Limbo and then almost immediately, Shadow Complex. Have been kind of curious about going back to the obvious roots of the latter’s genre since. Enjoyed the isolation and exploration element to it a lot more than I might have thought initially.

Super Metroid is my favourite game. 🙂 Glad you decided to try it out

Very glad you’re enjoying Super Metroid. It’s definitely the best in the genre and franchise. One of my personal favorites, too. Ah, if only I could clear my memory and play it again fresh…

Great topic, short but sweet article. It’s awesome how you touch on subjects that gamers probably often think about or experience, but are rarely written about (as far as I know). :]

It’s interesting how that “faction-based” model of game playing shapes peoples’ gaming histories. When I was younger I had an intense prejudice against most Nintendo first-party properties (except Pokemon, of course), which I ironically judged as “little kids’ games.” I guess you could say I was part of the “Sony faction” and only played cool big-kid PS1 games like Metal Gear Solid and Resident Evil and RPGs with pretentious storylines. I usually looked condescendingly at kids who swore by Nintendo and played Mario 64 and Zelda OOT. Now, as an adult, after all those years of misjudging, I have rediscovered Mario and company and wonder how I went for so long without experiencing the magic of these great games. Metroid (which was never aimed at children to begin with, lol) in particular. Like everyone else, I’m glad you’re getting into it, too!

@Jesse – Cheers for finally inspiring me to play this terrific game!

@melly – Thank you, that’s definitely what I try to accomplish with my weblog posts (and perhaps why they seem to take me so long).

I know the feeling. Had the same with games such as Metroid Prime and Half-Life 2, both of which I completed some years ago and absolutely love today.

I am also playing Super Metroid right now, for the first time, and even though it is a masterpiece, I sometimes have to force myself to playing it. Not because I don’t like it, but because it is very easy to get stuck. Unlike Shadow Complex (which is really just a homage to Super Metroid), there are almost no kind of hint system. I don’t like to go on YouTube every time I don’t know where to go to next, but on the other hand I am often not in the mood to go explorer everything, either.

Despite all of this, Super Metroid is clearly a marvelous game. I have made myself the promise that I need to complete it before the Other M is launched. The new Wii title looks promising, but I feel that I need to play the original game more before moving on to the new entry in the series.

I am often faced with a similar situation except that as a long time game industry veteran I am not just faced with friends who boggle at some game I haven’t played, but I have peers at work who suddenly doubt my competence in my position. Recently I have had to admit to having never played any of the X-Com games. It wasn’t pretty.

My problems were further heightened by having been locked into playing Everquest for a few years at the expense of a lot of other games. I would even buy games and never install them because I had to be in Everquest. Granted, I was in what was arguably THE top guild on any server, Afterlife. Then I moved to Australia and found that my XBox, PS2 and Gamecube games would have to be bought in the US by friends and mailed to me due to the region coding. For that reason I didn’t buy a 360, PS3 or Wii while I was over there. Luckily being in Australia meant I couldn’t play at the same time as my guild when they moved to WoW and was able to break away from MMOs a bit, though I did get to draw the logo for Thottbot which has gotten me more fame in the last few years than the piles I’ve games I’ve worked on. Strange.

Anyway, if you liked Super Metroid I suggest Shadow Complex. It is only $15 bucks as and XBox 360 download… provided you have an Xbox 360.