When I sat down to first write about Rez I considered analysing Rez’s story (rather than it’s graphical content) a challenge, but I now realise that I was buoyed through that piece of writing by my sincere love for the game. I feel I owe it to myself to attempt to analyse Child of Eden in a similar way.

Consider this a companion piece to my larger and more in-depth story analysis of Rez.

The first thing to note is that I have called this the “heroines” of Child of Eden. The influences of the original AI Eden are everywhere in this game. While she is absent, Eden’s influence is far-reaching.

It was Rez’s Area 5 that served as the conclusion to the original Eden’s story, as she looked at the vastness of space and time, and mankind’s influence on its timeline. Thematically in Child of Eden there is little such distinction, with each area imparting it’s own monumental epiphany to Lumi’s now virtual subconscious.

I believe that one of Rez’s primary focuses was the progression of civilisation and the “start” of mankind. If that’s the case, the Child of Eden is almost exclusively the opposite. And that’s not too surprising given the background of its heroine Lumi.

She was born upon a space station and destined (or so we are led to believe) to only examine the beauty of the world from above, never experiencing nature’s detail for herself. Raised in the modern, but stark environment of spaceships and stations. If you stop to consider this for a moment Lumi’s origin (in the context of this game at least) is quite a sad story. This is backed up by the fact that it’s barely touched upon. The game instead steadies your focus on her virtual inception rather than her origins. She is a celebrated, but obviously quite isolated figure. So it’s not too surprising that she embraces her brief, but new-found freedom within Eden. 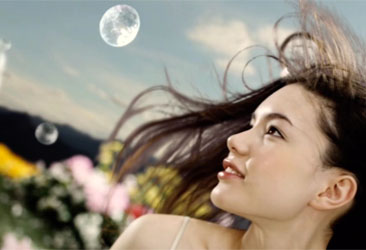 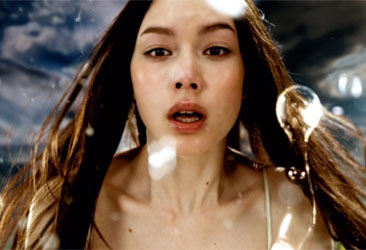 And she experiences it with all the vigour and terror of her predecessor.

All the memories and experiences of the population of the modern internet are there for her to experience first hand – in the only way she knows how to interpret them – via the framework of space travel and exploration. She is backtracking in parallel to Eden’s older exploration of the Earth and the wider universe. Except Lumi focuses on the present and future rather than the past as Eden did.

Lumi also takes obvious enjoyment from on the natural aspects of life on Earth, only briefly venturing into areas of science and technology. These moments could be interpreted as the intrusion of Eden’s understanding of the world. As Eden focused on the civilisation and learnings of man, rather than their environment, as I mentioned previously:

“What is clear is that Eden is beginning to analyse all that has come before her, trying to understand the world from the people who asked the first questions, wrote the first stories and began to shape our understanding of the universe in doing so.”

Lumi returns to this principle many hundreds of years later, except she attempts to explore the world she couldn’t while she was alive. It’s environments, landscapes and creatures, with a careful mixture of her own knowledge and experience of confinement in space. 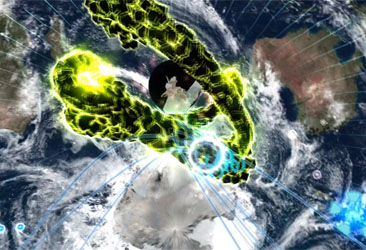 If as I wrote in my Rez analysis the virus that beleaguers Eden is her own expanding self awareness, then Lumi’s seems to be the intrusion of the darker elements of mankind venturing into her new and pure existence. Imagine all the evil and seedy aspects of humanity, combined with it’s detailed and expansive records of all that is ill from the modern internet.

I think for someone that has analysed Rez as much as I have, that might be why I find Child of Eden a little jarring compared to its predecessor – despite its obvious beauty – it is focused on a heroine that is coping with her almost unnatural rebirth. Lumi is an original, actual person rather than an AI gone sentient. As a result I found Eden’s awakening more uplifting and less bittersweet.

If, as (mentioned in my Rez article) the premise of Rez was to stabilise Eden in a mechanical sense, along with her new found humanity, then Child of Eden is focused solely on the emotional wellbeing of Lumi who is essentially travelling in the opposite path to the journey that Eden made originally – a human entity learning how to be an AI.

Secondarily, she is also learning what it is to be human, as she previous lived a half-life. Adored by the population of Earth as she shared her experiences through song, but unable to completely relate to their experiences of living.

Personally the most intriguing element of Child of Eden for me is not its beauty, but the narrative theme it continues from Rez. Both are games heavily imbued with the themes of water, as mentioned in my Rez analysis.

“Eden’s recreations within the areas of the civilised worlds are beautiful interpretations of the information she has to hand. She presents an optimistic view of the old world – and the keystone of each area is a river – the surrounding fertile ground allows basic life to thrive, as a precursor to man’s development into a culture. This goes some way to explain the fixed track the player follows.”

Child of Eden in particular has an aquatic theme, the pace of the introductory video feels as though it’s happening underwater, and the game uses the imagery of water in its opening level (Matrix) as the player sinks through wide caverns in order to rescue Lumi. Vast images the sorts of bubbles created in diving are projected on the walls as the player is surrounded by shoals of fish, and other underwater beings. 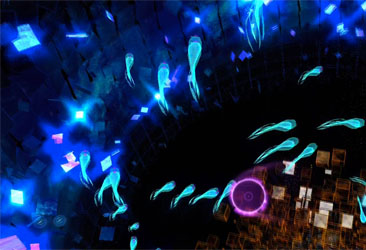 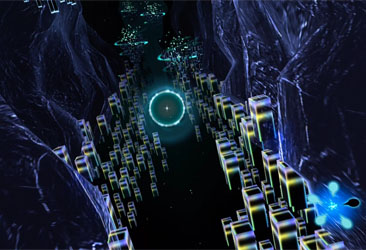 It is through water that Lumi realises her origins, glimpsing the Earth after her virtual revival. It is from water she is woken, as this is an apt metaphor when considering the makeup of the Earth, and how the land constitutes a small percentage of its contents. Lumi rightfully changes between views of the world from above (her limited, but comfortable understanding of the Earth) and the aquatic (a metaphor for the larger, darker and harder to understand elements). This starts in Matrix, but developments into the second area (Evolution). Rez’s focus on civilisation can be glimpsed here in the form of its underwater citys, with thousands of “buildings” separated clearly by a riverbed. But it is area three (Beauty) where the theme of water reaches its obvious climax. Waters life giving effect is the backbone of both games.

Rez ends with a horde of butterflies exploring a body of water, and in Child of Eden this river widens. If Eden soared above the oceans, Lumi struggles deep in its depths for most of the game, until the moment she is freed. She can continue to stare unnervingly down at both the Earth (as she did in life) but this time look fearlessly into its deepest, blackest water, while realising she is finally no different to any other person sharing their story through Eden. 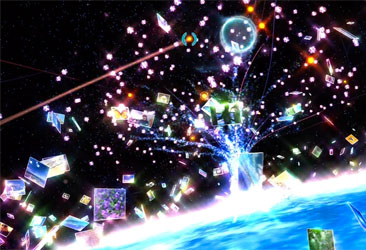 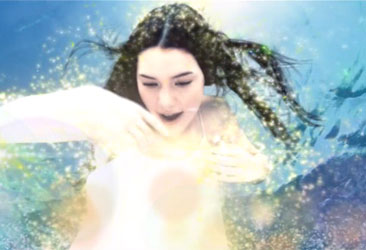 4 replies on “The heroines of Child of Eden”

I didn’t play Rez, so some of this is lost on me. But I thought it was an interesting read anyway.

I’ve considered writing my own thoughts of Child of Eden down, but I’m not sure if I will or not. My thoughts are on a completely different subject, though.

I had some mixed feelings on some of its design ideas and felt that some of its gamier aspects conflicted with some of the experience. There were parts of it that felt like too much of an uncomfortable middle ground between “Game” and “Audio/Visual Art Project”. Basically that those 2 aspects occasionally worked against each other instead of in harmony with each other. Maybe I’ll sort out my thoughts and do a post on it, I’m not sure. Maybe I’m just a crazy person.

Jesse you haven’t played Rez? You definitely need to address that. It’s one of my favourite games of all time, and I think you’ll enjoy it more than Child of Eden.

I pondered many different ways to talk about Child of Eden, I eventually settled on this, but basically I didn’t enjoy the game as much as Rez, mostly for some of the reasons you’ve mentioned.

I guess since you finally played (some of) Super Metroid, I owe it to you to give Rez a go. Fortunately the 360 version will save me the trouble of tracking it down.

I managed to play through Child of Eden last month, thanks to another free trial from LoveFilm (which also came with a £20 Amazon voucher that went towards the parts for my new PC). 🙂 I struggled quite a bit with the penultimate area, but I did eventually manage to finish the game. It’s way too short, but then again, the game is based around the music of Genki Rockets (Tetsuya Mizuguchi’s musical project), and well, there’s still only been one album to date (he is working on a second album though), so not much to work with.

The graphics are great, no faulting them. But I get the impression that they’ve shoehorned Kinect into the game (judging from almost universal reviews that say it’s better played with a controller instead of Kinect). And like I said earlier, the game’s too short. I’d be really annoyed if I spent £30 on that. They’re getting the right idea with the upcoming PS3 version though; that’s only retailing for £20, and you can currently pre-order it for £15 on Play.com and get a free t-shirt.