I’d be lying if I said there aren’t days where I detest video games. Days where the idea of playing something seems like too much like hard work. Lots of gamers like to pretend this feeling doesn’t happen, that gaming encourages overwhelming positive emotions and feelings every single day in a completely unending wave.

The days where this normally happens now are on days where I’m tired, swamped with commitments, and sometimes (just sometimes) an interactive medium seems too much like hard work. On days like this video games becomes another mountain to climb rather than an avenue to let me unwind.

It is very much a symptom of adulthood, not only finding the time to play games, but sometimes it goes as far as finding the energy to be inspired by them.

Days where I lack focus

I can’t dabble with games in the way I used to when I was a child. I’m simply unable to indulge in wiling away hours playing and experimenting in excited calm (like I used to). Often my gaming sessions now are very short and very focused, towards the end of the day when I am most tired and have the least patience.

As such the limited time I have to play games has a greater chance to frustrate me in some small way. The time limit renders me unable to make a great deal of progress with a game that needs more care, attention and time that I can perhaps provide that day.

I almost always turn the corner on feelings like this, but it’s important to talk about those days where no game seems to sate me. I’ve used Tombi as an example to illustrate this update. Not because it’s a bad game (it’s actually a favourite of mine). Although this month of gaming indifference has morphed it from a source of total joy and into one of frustration. As such it sums up the dangerous result of my temporary exhaustion with gaming nicely.

Tombi is a game I was highly excited to finally own a proper copy of, a games whose arrival I anticipated for years, whose genius has been partially ruined by my temporary (and perhaps) seasonal disinterest in games.

This feeling will pass and I’ll find a reason to get excited about gaming again (in a few weeks or less) but in the meantime I am pushing onwards through the game hoping the spark will leap back soon. I am certain it will because it is a game I have had the pleasure of playing at least once before. 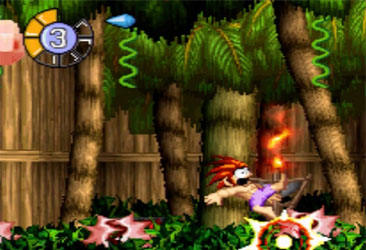 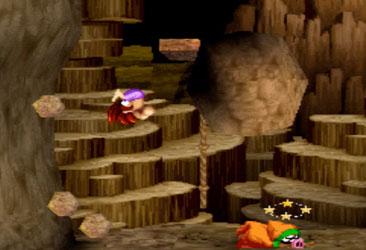 It seems almost too easy to blame the games we play on days like this for our lack of focus and commitment. However we are equally responsible for the discontent, and the lack of focus. It’s also really easy for others to dismiss such feelings away by encouraging ourselves to try another game.

I personally find when I feel like this that I carry this feeling into every game I attempt to play. Turning even the most precious and appreciated game against me like some sort of horrible mirror.

So a vicious circle builds where I can’t progress past these feelings. I’m fearful to leave games on a bad moment as this makes it harder to return and try again. During these “push on through” moments, my precious gaming time instead becomes a frustrating exercise in time lost and lack of progression.

While I often have a reason to be frustrated about an aspect of my time with video games, I’m frequently reminded of how beguiling gaming is, how quickly it can change my mood, swing me back and forth between adoration and scorn. I take my (rare) moments of disinterest in gaming as one of the few negatives I identify with the pastime.

Part of this is down to the wealth of games we have now, a lack of time and patience from the pressures of adult life, but also how spoilt we can be as gamers. Demanding a good experience as if it were a right rather than a privilege.

I’ve talked about how chronic illness has forced me to use video games as a coping mechanism, now it seems apt to talk how it’s building a sense of resentment on the days where I am sick and video games provide no respite. There are days I resent games for not helping me to escape from illness. However I do feel guilty for expecting them to do this, as I start to use them to cover up my own poor health and inadequacies.

More often than not though these feelings are an indication that I need to take a break from gaming for a couple of weeks and come back to it bright-faced, because games will always excite me and this temporary loss of how they do, just serves to remind me.

2 replies on “Sometimes gaming is too much like hard work”

It can be even more tiring when you’re trying to couch co-op a game. A good friend and I have been playing Resident Evil 5 and Lost Planet 2 since they came out. With life getting in the way this means that we average about two play sessions a year. Thanks to the Capcom-factor what often starts off as the pure joy of playing some lovely looking games quickly turns into a grind when checkpoints are the wrong side of a long cutscene or losing a big boss fight kicks you right back to the beginning of the level.

One of the nice things about portable gaming (for me) is how I can open a system like my 3DS from its sleep mode while it’s been sitting on a charging dock, play for a bit, then regardless of where I am in the game, close it and set it back down on the dock. I find I often do this when I don’t feel like getting a whole big console thing going. It’s nice. I’m currently doing that with the new Paper Mario.

But even then, I too will sometimes get burned out on video games as a whole temporarily. Fortunately, staying busy in my other hobbies like music can help make games feel fresh again. Of course, when illness drains your energy sometimes all you can bring yourself to do is put on a show in the background (if even that) and zone out a bit.