You control the character of Rincewind as you navigate the story of Guards! Guards! – the quest to locate and subdue a summoned dragon. Fans of the books may be disheartened by the fact that the City Watch are absent! 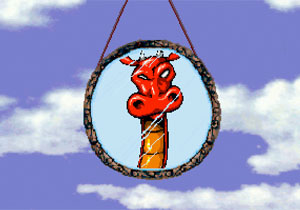 What is clear from the very offset is that Discworld an extremely funny game with the pacing and laugh-out-loud humour of the books, every character is absurdly funny, it’s difficult to play without laughing. 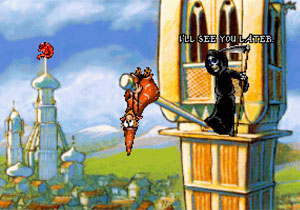 The look of the game is bold and distinctive, reminiscent of the original book covers by Josh Kirby but with a little more childish charm. All of the characters and environments look distictively Discworldian. 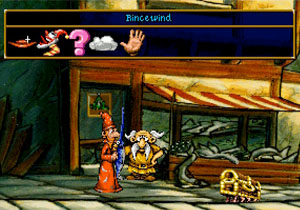 The voice acting used in the game is superb with the recognisable talents of Eric Idle, Tony Robinson and John Pertwee helping to bring a smile to your face as you meet more and more of Anhk-Morpork’s residents. 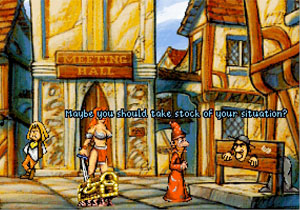 Rob Lord’s soundtrack to the game compliments the feel of each area perfectly and has been recently enchanced as part of the ScummVM music enchancement project, the end result is well worth a listen. 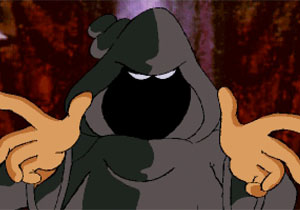 The narration scenes in the game are a neat way for Terry Pratchett’s hilarious asides to be included in the game, in which occasionally an amusing cut-scene appears to explain the context of the area more. 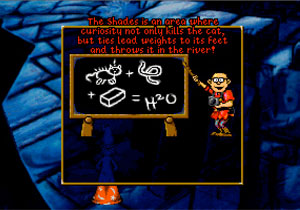 Something a little different

The lack of a normal game GUI is nice and gives you more space to play, but the drawn backgrounds – beautiful as they are – usually make it extremely hard to figure out what objects are usable and where exits are. 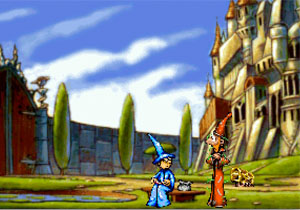 Adventure games well known to be taxing, but the nature of the setting and characters of Discworld makes things even trickier than most other puzzle games, requiring you to think even more out of the box! 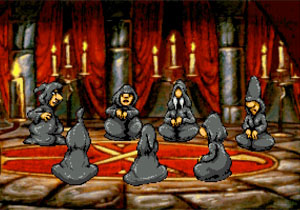 There are tons of items to collect during the game, so the decision to use the Luggage as your inventory was a fitting one. Although this fits neatly into the story it can add another clunky step to using your items. 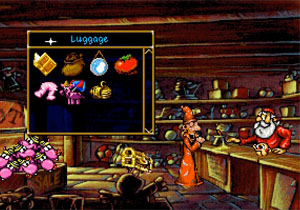 Fans of the books may understand and succeed at this game a little more, as it a largely faithful by-product of the series supported and improved by the authorisation of Terry Pratchett himself! 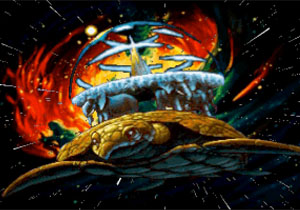 The controls are extremely simple, relying solely on left and right mouse clicks, but directing Rincewind down the path you need him to follow can often be hard due to the difficulty of seeing your environment. 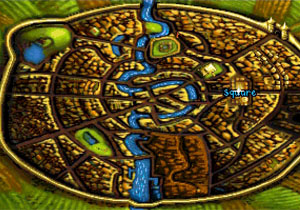 Discworld works as both a puzzle game and satire of it’s subject – just like the books. It’s frequently pokes fun at both itself and gaming convention with the character’s frequently breaking the fourth wall. 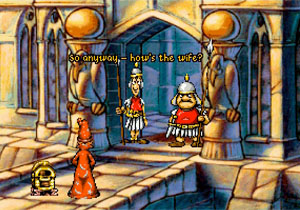