One of the ideas that Nights Into Dreams is keen to get across is the potential of dreaming. Every moment of the game drips with nocturnal imagery and as such it feels and plays like nothing else available. 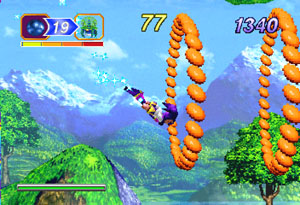 You initially control the characters of Elliot and Claris, two children pulled into the dreamworld at moments of turmoil, they are able to join with the flying character Nights to fight Wizeman’s evil creatures. 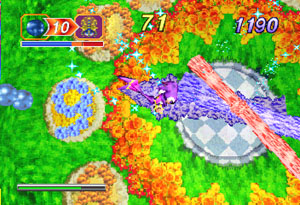 With Nights in tow, the game becomes magical, emulating the freedom and perspective of flight perfectly. This is in part due to the extremely comfortable early analogue pad that the game was usually shipped with. 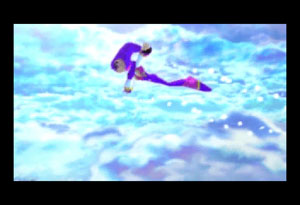 The naming conventions for the game can be a little confusing to start with, but each level is divided into four circuits of a area where at least 20 orbs must be collected to release a coloured Ideya from it’s prison. 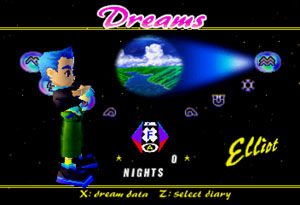 Once you’ve got the basics, Nights becomes a highly addictive score attack game by building up links of orbs, stars and rings to build up a huge score before reaching each rounds goal. 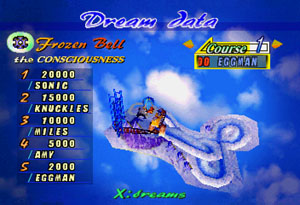 Each boss presents a new challenge, and are usually pretty easy to dispatch once you figure out how to use the acrobatic skills mastered in each level. Beating a boss faster means a bigger multiplier on points. 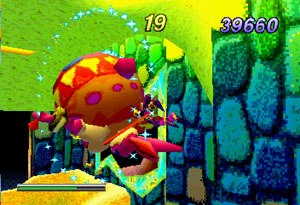 Every level is beautifully designed making the best use of the Saturn’s graphical prowess and enriching sound. The circuits around each level play with different perspectives and environments to help immerse the player even more. 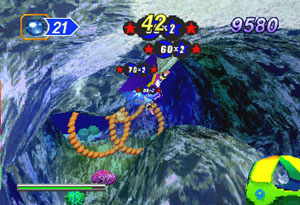 Each section of each levels provides you with an overall score indicating your success. Running out of time as Nights without capturing an Ideya means returning to one of the slower and more vulnerable children’s forms. 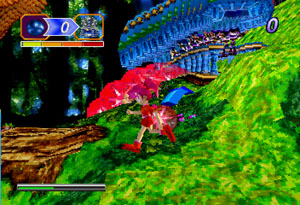 Every corner of every level drips with character, whether it is the creatures along the trail or the many intriguing new platforms or objects to navigate, while imaginative it can sometimes make understanding where to go a little tricky. 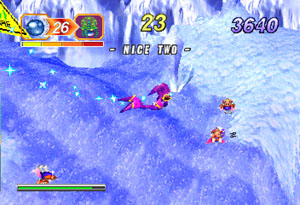 Nights Into Dreams has an enduring influence in other SEGA games, with mentions in countless other Sonic Team releases, despite the lacking Wii sequel, it is certainly still worth picking up the original or remake. 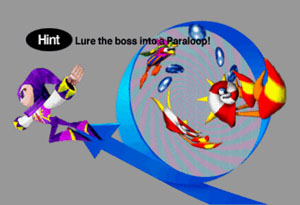 It’s A-life system which controlled the outcome of how the Nightopian creatures perceived you would be used again for Chao’s in Sonic Adventure, and the real-time clock elements of Christmas Nights were pioneering. 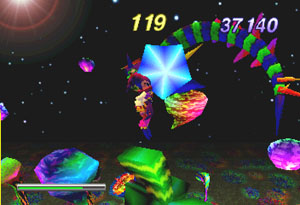 The fantastic soundtrack to the game featured in other Sonic Team classics such as Phantasy Star Online, and while the graphics have dated a little, the music helps to elevate the mood of the game perfectly. 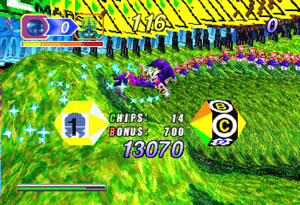