If I ever needed a reminder of the indelible quality of video games, then Panzer Dragoon Saga served nicely.

I have started Panzer Dragoon Saga at least once before this occasion where I actually completed it – this time the nostalgia from a mere two years ago was enough to propel me through the game.

Ironically, I last time I attempted to play Saga was in a period of recovery following surgery, my recollection then was that it was compelling game, worthy of the praise I had seen piled on it for many years, but something was missing. Tired from surgery, wracked with pain, it wasn’t the game I needed, it was too subtle, too gentle in persuading me to continue.

The real message of Panzer Dragoon Saga is nuance, that is perhaps why it is so difficult to really appreciate over a decade after it’s original release. Unlike it’s contemporaries (such as Final Fantasy VII) Saga is a game of understatement, and that’s no bad thing.

Most of the game is spent exploring the game world on the back of your dragon. The gameworld is quiet and brooding, mottled with splashes of pale colour, and dotted with surrealist landscapes, all complimented by the game’s quietly powerful soundtrack.

One thing you notice immediately is the apparent lack of people. As such the game feels very lonely, and this is a deliberate choice on the part of Team Andromeda. The sense of excitement you experience when discovering another person in Saga’s beautiful but painfully barren world is palpable. This experience really lends itself to this RPG experience only lent to Panzer Dragoon once. So each NPC feels more important, more necessary to the story. I found myself hanging on their every word unlike any other RPG. 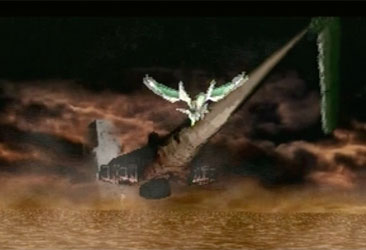 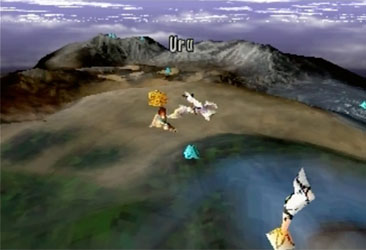 Panzer Dragoon Saga’s theme of isolation, combined with this rarity strikes the perfect tone. Playing it all these years after its release at a time when everyone was focused on the New Year period felt as though I had walked far off the beaten track. That I had a link with all the people that has sought this game out like myself and stuck with it far past it’s quiet opening, far past its moments of visual grandeur, which does still have the power to impress.

Saga sets a deliberate pace that might be too slow for some, but this is only so it can catch you out with the payoff towards the end of the game. I haven’t enjoyed an ending so thoroughly  since completing Xenoblade Chronicles. The very best gaming endings aren’t just the pay off of the story, but actually linger with you weeks after the game has been completed, and it tinges me with sadness that many people won’t be able to experience Saga’s spectacular finish. 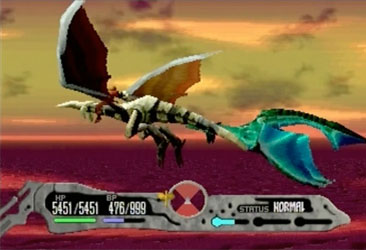 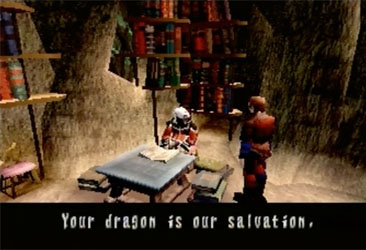 It’s rare that I find the inspiration to continue with a RPG that still employs a random battle system. This is one of the moments (other than moments when Edge is on foot) that hints at the games age. However the battle system goes immediately changes from competent to endlessly enjoyable, as you experiment with completing battles quickly for better ratings, experience and items, and determining the best position for your dragon to move in real time around your enemies.

The bond that you build up with your dragon is worth a mention too. As your longest companion through the game (starting with your ability to name him). This games starts as a story of friendship, but belies something more powerful.

The sense that this is something you have experienced before – particularly if you have played the two previous Saturn Panzer Dragoon games is palpable. This is folded into the narrative by the indelible dream-like quality of the game, a sort of hazy sentiment that carries through each carefully crafted scene and landscape. The pacing of this game also nods of a lucid dream particularly through the freedom of flight.

This is supported by the ending of the game too, which reveals a richer thread to the narrative that makes your subsequent memory of the game more humbling as you spin through each exciting realisation in turn. 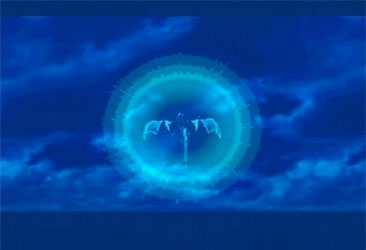 So is Panzer Dragoon Saga deserving of all the high praise it has received in the years following its release? In all probability yes – if viewed through the careful lens of the time it was made. Looking back it is an extremely revolutionary game, it left an impression on me for another reason though.

I am now five years into a chronic illness. The optimism from that promising surgery back when I last attempted Saga is mere vapour. I am more tired than ever, and the fatigue has an odd effect on my brain.

Each time I sit down to play or write about a game, I left its finishing screen feeling empty-headed. Sometimes games can take us back to a moment in time, through their gameplay, their music. Their quality. And Saga did this, it took me back to that moment of recovery back in 2010, when I still had hope about my illness.

As such it has been my immense pleasure to play, despite all the pomp and noise from other games, it was this quiet, almost sombre experience that reminded me exactly why I was so inspired to start discussing video games back in 2009 upon completing this website.

Saga’s patient, impassive glides over landscapes, water and its breathtaking technicality reminded me to walk off the beaten track a little more often, to find joy from experiences that many others have moved on from. To enjoy the rich tapestry of our gaming history rather than just our gaming present.

One reply on “The narrative landscape of Panzer Dragoon Saga”

Panzer Dragoon Saga is my favourite video game ever: exciting, challenging, haunting, beautiful. I’ve never really been able to write about it for one reason for another, so I appreciate your attempt to do so!