I like many others have been pulled back into the world of zombie killing following the recent downloadable content for Left 4 Dead. We wanted more zombies and we certainly got them.

While Valve hasn’t exactly reinvented the wheel in this recent update, the new experience it provides it certainly worth dusting off Left 4 Dead for…

773 common infected, 15 smokers, 11 boomers, 7 hunters and 12 tanks were harmed in the making of this weblog post.

Do you mention video games as one of your hobbies? Perhaps more of us should – numerous present gen consoles are becoming some of the best-selling game devices of all time, helping those who wouldn’t normally play games to become engaged and willing to try them.

But what about the rest of us who do this full-time so to speak? The people to whom the DS is a five year old console.

The analogy of the DS is a good one. I remember queueing for the original Nintendo DS back in 2005 at a midnight launch. I also remember that some clubbers were trying to walk home after a short night out. They thought we too were queueing for a nightclub, and started to chat to those of us waiting there.

After explaining that we were waiting for the new Nintendo console, they came in and bought one rather than moving on to their intended venue. I can only assume based on our brief chat they were former gamers as children – remembering their nostalgia for Nintendo long since past. 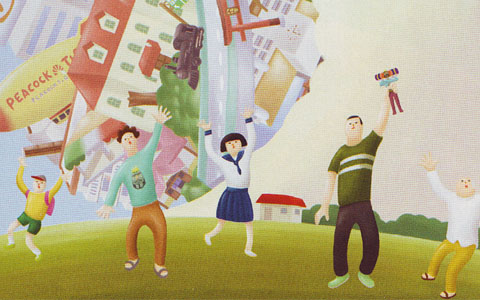 Fast forward four years and this is apparent everyhwere – a growing population of casual gamers have realised the enjoyment that can be taken from gaming as adults. The positives are starting to vastly outweigh any negative connotations for these new, but now more informed new gamers.

There is no denying that video games have become more of a mainsteam pastime of late – but even so my personal experience with being a vocal video games supporter has been largely negative. This is usually due to the following:

There is another way

Many gamers I know are quite ashamed – or made to feel ashamed by what they enjoy, despite the joy it gives them. There are good reasons for this largely related to gaming’s infancy, and like anything young it’s open to exploitation. There’s a really nice metaphor for this too in Left 4 Dead – for those who haven’t played it features some really intriguing in-game graffiti. 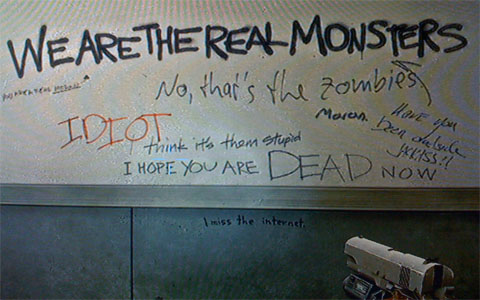 This is what being a gamer often feels like to me; a continual conversation. Only the voices outside of the industry are the largest and loudest. Gamers may deal with a huge amount of prejudice for what they enjoy, but we do so because the experience of playing games can be profoundly positive and personal. The greater interaction playing them involves, over say a movie or TV programme means we feel obliged to speak up for their merits.

Is your gaming a closely guarded secret or a badge of honour? Personally, I’m long past the need for reassurance or acceptance from others, but part of me hopes others are too.

We already know games can trigger real reactions and emotions, such as fear, excitement or awe, and one of the many ways developers are able to do this is through scale and enormity.

Size helps to convey the idea that the world is not a flat notion on paper, but an immersive and expansive playground rewarding you for wanting to explore it. A little gift from the mind of the developer from them to you.

Scale is a massively important theme in gaming because it can be deeply emotive, and a confirmation of what is to come. Some of the best locations in a game world have been those which has tapped into this idea of a wide expansive space setting the mood for the game. This emotive link to an area is often why some gamers can feel a particular affinity for the early areas in the game, the sort of nursery locations which encourage them to explore as they get used to the game.

Half Life has numerous examples of “impact areas” moments in the game – locations that break up the tone of the action, aid the narrative, or are there simply to entertain. Such as the long, cable car ride to the heart of Black Mesa, or the enormous fans that need to be avoided and dodged. And finally, after hours of crawling through vents and destroying labs; this magnificent open sky and dam awaits – a moment to pause and enjoy before continuing. 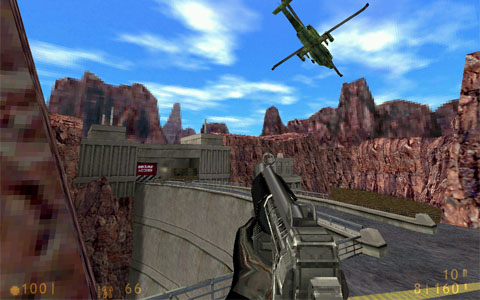 In a similar theme to impact areas – games frequently use large objects as part of the level design, an enormous centrepiece to the level that helps the player to navigate an idea by providing a focal point, or an object that must be navigated in some way to complete the level.

The sphinx in Tomb Raider for example, is the gateway to the remainder of the early Egyptian levels, a large, eye catching object which continues the level theme while providing the player with a physical embodiment of the character’s goal – the high point they need to aim for.

All of these principles work in 2D also. In Blood Omen, the player must walk between the legs of an enormous statue of William the Just, a representation of the enemy you are on your way to face, which stands tall over the landscape. 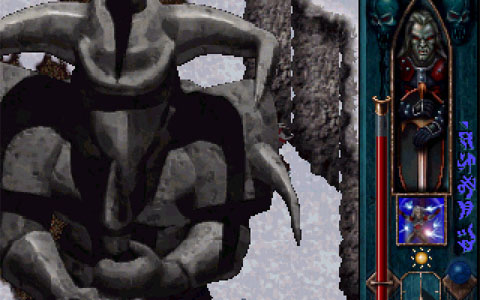 It is well-known that game bosses provide the climatic challenges within the duration of a game. But would the conclusive bosses at the end of numerous Final Fantasties and Zelda games be quite the same without that climatic assent (or descent) into the unknown?

What is becoming more and more common in modern video games is to create, larger bosses which physically represent the challenge the player is about to undertake. Examples in normal games of this sort of large, imposing enemy is common, and is becoming more so – particularly in massively multiplayer games, where respawning enemies often have to fill the requirements of the area they reside in.

This screenshot from Final Fantasy XI shows this different in scale between enemy and character well, the tiny shapes of the people working together to defeat the large, jelly-fish like Yovra are barely visible. 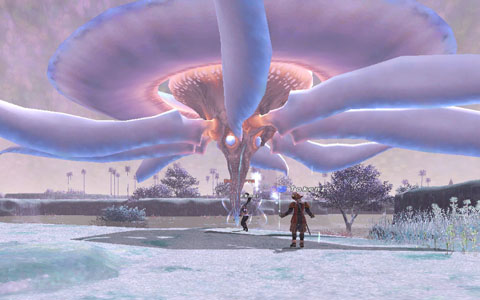 I’ve never been much of a fan of the Resident Evil series, but the reinvention in the shape of Resident Evil 4 shook me to my senses like many others, and left me hungry for more.

Has Resident Evil 5 managed to shake off the shadow of it’s mighty predecessor? Largely no (how could it?) – but here’s what I think works and what doesn’t.

I suspect if you start RE5 expecting it to be better than RE4 you’re going to walk away disappointed. RE5 doesn’t improve upon the genre in the way it’s predecessor did but it will provide you with an enjoyable experience which will be improved by the fact that you can play with another.

Thanks for visiting my website, although I’m sorry to say that it’s still a work in progress. Somewhere in the region of 80% done to begin with but after years of procrastinating with websites I figure its time to chuck something up on the web and hope for the best.

Rather than hide all the stuff I’ve worked on, I thought I’d use my first post to describe how pp.net was put together and what is left to do.

I started with a rough sketch, this is probably one of my first pages of notes. Most of my websites start this way – random scribblings on paper as I start to figure out what goes where and what I want to do. For once I have a really clear idea for a design in my head and a fair idea of how to put it together. 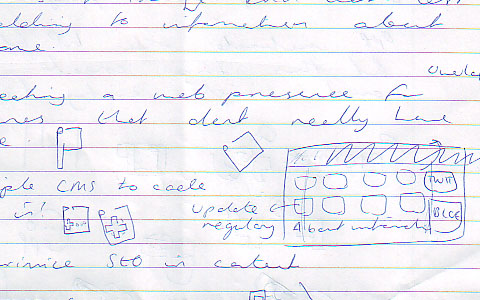 I have to start building quickly, before I lose momentum (and give up, and go enjoy my spare time). This mentality has led to my website being on hiatus for the best part of two years. So I start to plan low-res visuals in Photoshop. 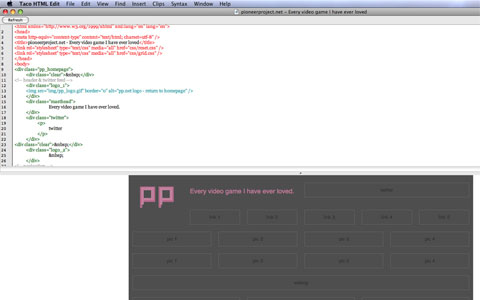 I’m trying a few new things this time around. For example, since the last website iteration I’ve become obsessed with twitter, so I need a twitter feed. I’m also trying a brand new Content Management System (CMS) to save me time when the design is done. By the time I get around to start coding anything I am too invested too much time into my design to give up and go play games. I must finish. 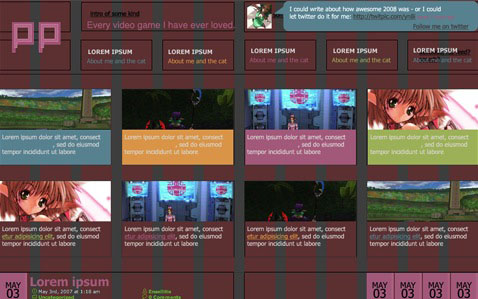 The weblog was an absolute after thought – well I knew that I would be making one, but I wanted to concentrate on the games content. So rather than create something from scratch, I settled for Ensellitis’s theme for WordPress.

And then well into theming my weblog for wordpress I realised after some technical jiggery-pokery… that I didn’t want to use WordPress and why not try blogging in something else? So with Alex (the PHP and Javascript guru), I started Isolation in Frog CMS. 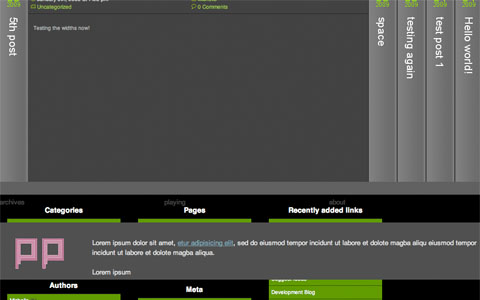 Now hours of coding and testing follows. Alex had to do quite a lot of tweaking of the Frog backend to get to play nice with the design, that and getting the date images GIFs to behave was probably the trickiest part. The weblog was running in Frog after about 40 minutes of play on my end – and working fully (with all of the features I wanted from WordPress) after about a week. We both have other stuff to do full-time I sure we could have cracked it quicker.

Start to finish technically, this has taken about three months worth of spare moments. My first lot of content took a month, as I wasn’t keen to rush my work out ASAP. As far as I am aware, the only things left to fix is the inspiration page, which is another task in itself. I’m also aware that blog entries, and my contact page, do not validate properly, because of the way the CMS interprets my forms, all other pages should validate, and look lovely in all modern browsers (and iPhones!). Hey as long as you’ve got Javascript on.

So I’m about two years late. Let me know what you think. Was it worth the effort?